Peep the trailer for a new video from our friends at Corpse Corps boards. 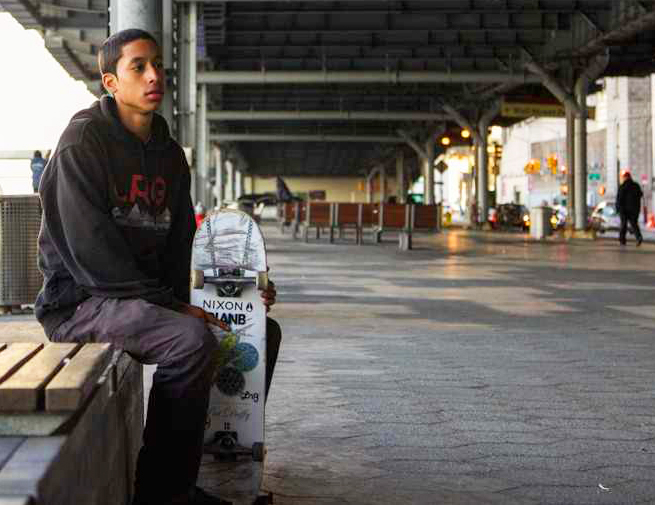 This is Joel chilling on a bench. [p] Diego Garcia

Mike Gustafson: Whaddup Joel? How old are you, where you from and what’s a fucked up story from your town?
Joel Espinal: Well my name is Joel Espinal, I’m 17 years old and I’m originally from New York. I was born there, lived in Harlem, and then I moved to New Jersey when I was about 8 or 9 years old. My parents wanted to move so my brothers and I would have a better education, and they thought it would be safer over here in Jersey. Right now, I live in Dumont, NJ. It’s a small, quiet town, but It’s said that the “Iceman” used to live here. The Iceman was someone who killed people around the New Jersey-New York area, and stored their bodies in refrigerators or something like that. If you want to know more about him, google his name haha.

Mike Gustafson: How did you get into skateboarding and where has it taken you? I’d imagine you’ve traveled a bit to skate. What’s a good road story you got? Did you ever make a sign that said, “Show us your tits” place it in the window of your vehicle and actually have it work?
Joel Espinal: I got into skateboarding from watching the X-games and things like that on T.V. It just intrigued me, like I wondered how the board stayed under the feet of who ever was skating. My cousins and my older brother started skating and from there I decided to pick up a board. So far, I haven’t “traveled” much, but it’s certainly a goal. I’m usually in New York, but I recently went to Philly which was a dream come true. I’ve always wanted to visit places like Love and Municipal. But I definently have a list of places I want to visit that include going to Cali, Barcelona, China, and pretty much the entire world. I love to travel and experience different cultures. On the other hand, I don’t have any good road stories to tell because I really haven’t been on the road at all haha. I have seen the “Show me your tits” sign but I’ve never made one myself.

Varial Heelflip over a dodgy rail. [p] Will Violick

Mike Gustafson: Have you ever been in a fight?
Joel Espinal: No, I have never been in a fight. I play around sometimes, but not seriously. I’m not the type of person who likes to fight people over little things you know? Most people these days just fight over the smallest, stupidest things ever. I dislike making a scene in front of people as well. It just makes me, and the person who I’m fighting with look dumb. But at the same time, I’m not going to let someone push me around. If the situation presents itself, I’m going to have to give someone the hands haha. Overall, I usually control myself.

Mike Gustafson: I Googled your name and your “Skatepark of Tampa” profile says you have some heavy fucking sponsors. Like Nike an shit. How’d you get hooked up with all them?
Joel Espinal: Oh you saw? Then, you probably saw how bad I did at Damn Am haha. But yeah, getting on Nike was funny story. The Nike team (Paul Rodriguez, Eric Koston, Donovan Piscopo, Stefan Janoski, etc.) showed up to shoot the “Flash Pack” commercial at Zuccotti park in New York. The team manager, Scuba Steve was also there. My friends and I knew beforehand, that this was a perfect opportunity to meet the TM and get his email. Time passed and I had to go home, so before I left I was like, “Ok, there’s Scuba, all you have to do is walk up and introduce yourself to him.” I pretty much got shy and decided to leave because he was talking to Stefan Janoski at the time. So my mind is already made up to leave but my friends stop me and say, “Really Joel? You’re really going to leave when he’s right there? This is a perfect opportunity for you to get on Nike and you’re just going to blow it away?” I deeply think about it, and then just walk to straight to Scuba. I introduce myself and ask him for his email. He asked me for my phone so I could take down his email but my phone was dead so I was like, “Damn man I blew it.” Suddenly, Scuba takes out a pen and a dollar, writes his email down and hands me the dollar. I was in complete shock and just speechless. Stefan Janoski was right there the entire time just watching the whole thing. I thanked Scuba and we quickly left the spot. The train and bus ride home were crazy. My boys and I were jumping up and down from excitement because that was the biggest thing to happen to us you know? Anyways, I sent him footage, he liked it, and he sent me some shoes after. I couldn’t believe it. Otherwise, all of my other sponsors I met through social media. It sounds funny, but the social media plays a big role nowadays.

Mike Gustafson: Best party story? I fucking miss house parties. I haven’t been to one in forever.
Joel Espinal: I don’t have any good party stories to tell because I don’t really like to party. But I do have a weird one. When I was little, I pooped in a pool, haha. I was in Florida, and it was nighttime. I really had to go to the bathroom and I couldn’t find a place to go, so I pooped in a pool. When people saw the turds in the pool they just started laughing and exitind the area. My dad had to go underwater and pick the doo-doo up. It turned out there was a bathroom close to me after all. It was embarrassing but it’s all good now. I look back at that moment and just laugh.

Mike Gustafson: Shout out’s?
Joel Espinal: Of course! First, a shout out goes to God for just always being good. Shout out to my parents, my brothers, and all of my family. My friends; Anthony, Will, Kai, Diego and Jeremy for helping me along this journey. Shout out to Scuba Steve, Ryan Denman, Jared Lucas, and Tyrone Romero for supporting and showing belief in me. Shout out to Plan B, LRG, Nike SB and Bones Wheels. Shoutout goes to everyone that believed in me. Thanks to everyone at Step Dad Mag for this interview!

Listen to the audio of our, “Interview with a Female Thug” from issue 11, October 2014.